skip to main | skip to sidebar

Maria Montessori was correct
about all things but whimsy. It is true:
your baby’s mind can grasp and hold the rules
of science, music, and the mother tongues
of many tribes. Not so the minds that age
along with mine: we marvel at the scope
and depth of our own ignorance. It seems
that my old brain, made drunk by too much time
in Once Upon a Time Land, can’t be fixed
with lobster claws, or sticky little hairs -
I should have started sooner. One may ask
himself, before another asks: What’s wrong
with you and your contemporaries, Joe?
They don’t remember what they learned in school.
They’re taking valium on Christmas Day.
They do not have the gumption to complete
a marriage, or a novel…. or a poem.
Posted by Jay AHHHHHHHHHHRRRRR! at 7:42 PM No comments:

BLESSED BE YOUR SWIMMING POOL

I am delighted for you, and the man
I once was would have envied your good luck:
A swimming pool in your backyard!  In ground!
With water deep enough that diving in
Won’t cause you to dash out your brains and guts.
Those spurting apertures that I enjoyed
Invading with my fingers as a boy:
They work with vents recycling water, no?
I say, take that, Old Heraclitus! I
know one man who can step into the same
water over again – all summer long!

But Heraclitus was talking about rivers
and we’re talking about your pool. We
are talking about clear water, dosed
with enough chlorine to kill algae, bacteria,
and anyone who drinks a good deal of it.
The philosopher’s river, that cannot
keep itself alive without taking on the scum
of the earth, is where they have to do their
swimming who cannot get themselves
a pool, or get in good with the pool people,
For a dip, or a little Marco Polo.

And don’t even get me started about
the beach crowd, so peppered and assaulted
with sand that they rinse off in the ocean, that
bastion of death, or her step sisters, the sounds,
bays and tidal straits, or any fish-filtered petri
dish left behind by the shifting of Great
Pangaea, or the occlusion of Mythic Atlantis.
Don’t get me started on folks who just managed
to crawl out of the ooze, then lounge on the
beach - daring the tide to give them back
their gills. Sun-bathe? On this dis-ozoned Orb?

We will leave this place of selfish tears,
and search for your monument wherever
it chooses to bloom. Unnecessary
to erect a proper, lifeless headstone when
a splendid, mighty inkling of forever
is already swaying, already beloved,
in some delightful place not far from here:
some fine, new world where appreciation
is unleavened by memory, where you are
always as strong, healthy and beautiful
as on the fairest day of the fragile
little time when we were blessed to love you.
Posted by Jay AHHHHHHHHHHRRRRR! at 7:36 AM No comments:

WHILE ALL THE WHILE

Love like a vapor -
love like an inkling of
what was or what might be -
comes through the wall
as if the wall was a window:
splintering bricks and
turning mortar to treacle,
while all the while there is a door.

Love like a an upstart -
love like an agitator mad
at contentment - fumes at the elders
who abide in a bedroom
more like a wedding chapel:
flickering candles
dapple the stained-glass shutters,
while all the while there is a door.

Love like a soldier -
love scarred from battles
that have only just ended -
cries liberation: scores
of gaunt, haunted prisoners
find that their shackles
are like cheap Yuletide garland,


while all the while there is a door.
Posted by Jay AHHHHHHHHHHRRRRR! at 8:45 AM No comments:

PART ONE - THE TAXICABS WITH THE SCIMITAR MEDALLIONS

The taxicabs with the medallions
that resemble the medieval scimitar
have no meters or two-way radios.
Their stern and deliberate drivers
will take you to any location
within New York City’s five boroughs,
as far into Jersey as Newark,
in New England, as far as New Haven,
and well into Westchester County
for ten dollars and ninety five cents.

This bargain is fixed as a homage
To A D. 1095:
When The Knights of the Studded Scimitar,
from whom these chauffeurs are descended,
left the humid suburbs of Castoria
to join the Clandestine Crusade.
The Knights were intent upon driving
the Saracens out of Assyria,
the Visigoths out of Carpathia
the Cantalopes from Areola
and the Orioles from Baltimoria

But they sailed into southernmost Europe,
and they lingered in lower Sardinia.
They ate tons of polenta and mussels,
which they sautéed in saffron and cinnamon
and washed down with port and zambuca –
until they got terrible dysentery.
(and this was especially unfortunate,
since their trousers were leather and chainmail.)

Exhausted, and quite dehydrated,
The Knights of the Studded Scimitar
limped into the port of Brundisium,
which was under the fey jurisdiction
of a genial rogue theologian
named Simon the Hairy Apostate.
Simon had seven fine wives,
and each wife gave him one dozen daughters

Simon supported his family
with a fleet of brocaded gondolas
that he leased on a bi-weekly basis
to the Knights of the Gnarly Aorta.
This was a fateful transaction:
The Apostate was using the gondolas
as the bait in his quest to find husbands
for each of seven dozen maidens

But the Knights of the Gnarly Aorta
were a band of discreet homosexuals
who would never be looking to marry,
but were always most willing to ferry
all the wealthy young men of Brundisium
from the docks to the seedy marinas -
as they sang their provocative arias,
and humbly declined to take tips.

Simon the Hairy Apostate had eighty four daughters:
Some of them were completely without warts,
and all of them knew how to stretch the stew.

The prettiest one was Clarissa Sensa Verruca

(Clarissa was also the oldest, But only by three and a half days.)

Clarissa’s sisters, in age order, were:


Simon had no sons.

Simon also had no walking-around money.
Posted by Jay AHHHHHHHHHHRRRRR! at 5:35 PM 1 comment:

The Solitary Dies and Goes to Heaven

So, the Creche and Crucifix,
the Sages and the Saints,
for all the pain and longing
they exorcise or temporize,
are just supposed to bring me
to this casting off....
So, the chips of sacred wood,
the fragments of tortured bone,
gathered from my pockets,
and placed in my folded hands,
are just supposed to give me
the key to another portal....
So, the maxims that the blessed
chain passed on to me,
and the slogans that the teeming
throng instilled in me,
are just supposed to calm me
as I go into the dark....
So. the death of flesh and bone
is just another incubation;
a kind of excarnation.
So. what was flesh and bone
becomes a sliver of ciborium;
a spatial moratorium;
a temporal arboretum.
So. While I lived, I was frustrated
by a little time in a vast space.
Now, I am consecrated
to a little space for a vast time.
So. Finally. The Beginning. Again.
Posted by Jay AHHHHHHHHHHRRRRR! at 3:46 PM No comments:

IF YOU AND I CAN'T BE FRIENDS ANYMORE

If you and I can’t be friends anymore,
I’ll deal with it: just go on being you,
And I’ll be me. What else is there to do?
(And why did I not realize this before?)
If there’s no way of knowing what’s in store,
Then I’ll do this, and you do that. Beshrew
Mendacious knaves who say we misconstrue
When we all-too-well understand the score.
I wanted you to love me, friend of mine,
But if you won’t or can’t – I’ll get along,
And so will you. We both will be as fine
As fine can be. This moment, right or wrong,
Is what there is. I will not ask or pine
For something else: I’ll let myself be strong.

Posted by Jay AHHHHHHHHHHRRRRR! at 1:19 PM No comments: 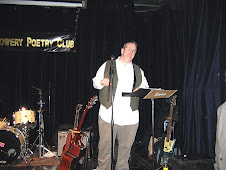 Ambivalid and Back In The Holy Bronx 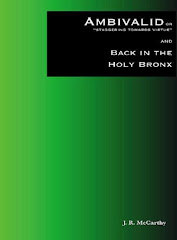 To buy Ambivalid now, just click on the PayPal button below!

Match Up
Match Up provided by The Free Dictionary

The Poetaster recommends these wonderful places...